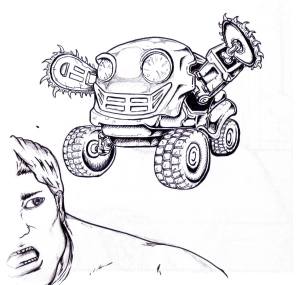 Robot Evolution is a story set in the near future. A society not far removed from our own that has become even more reliant on technology. A potentially dangerous relationship between humans and machines.

The story revolves around the work of a technician, in the midst of a bout of recent occurrences of machine malfunctions.

– A potential robot uprising,,
– A new evolution of robot consciousness,,
– Or something much much worse!